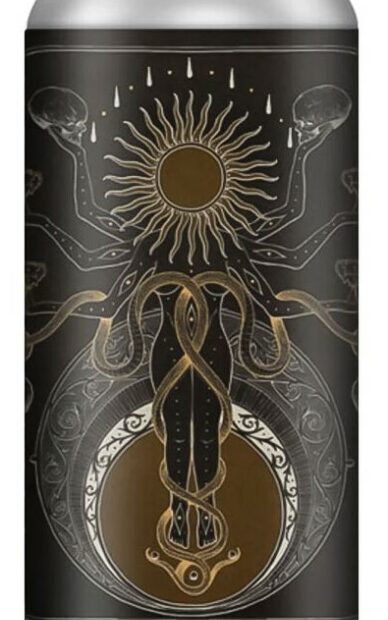 Beginning in 2013 when co-founder Russ Bisset met head brewer Brian Dickson at a beer festival, the brewery began with a home brew set up in a basement. After a year of selling their beer at farmers markets, they gained investment and the brewery began to take shape. This is part of the Patrons Project, a collection of seven beer limited edition series. This is the first beer from Series 38, involving artist Adrian Baxter and based on the seven deadly sins. I’ve had a few of the Patron Project beers when they’ve made it to these shores, and I’ve thoroughly enjoyed them all. When I found this tucked away on the Systembolaget website with no picture and very little information, I thought I would give it a go due to their track record. Thankfully I took that chance as this might be my favourite beer of the entire tasting

This was very thick when poured, with a blood orange smoothie like texture and colour. A thick fluff like foam formed when the beer was swirled but dissipated fast. The fresh strawberry aroma was fresh and delightful and really made you want to drink it. The thick smoothie body coated the palate with its strawberry tones upon swallowing, with vanilla and citrus also noted. Carbonation levels were low but it suited the style well. The aftertaste gently lingered with a fruity stickiness on the palate and almost begged for another sip straight away.

If a beer has a 70kr price tag it needs to be exceptional to warrant it and this accomplishes it. Big, bold and fresh, I really enjoyed every drop of this. As soon as I tasted this I tried to order more, but it was frustratingly sold out. This was absolutely gorgeous, and I could easily finish a can of this on my own on a cosy night in front of the fire. I’ll be keeping an eye out for even more from this series coming out soon.