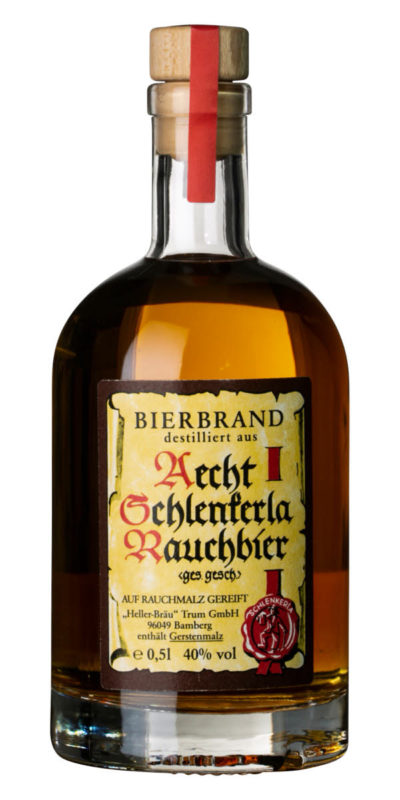 It’s always nice to throw in somewhat of a curveball into a tasting. When you bring out something that people don’t expect, it can really change the atmosphere of a room by piquing peoples curiosity. While I was looking for beer a few month ago I happened to come across this in the spirit section of the shop. I found it curious as I had never seen anything like it before. This is Bierbrand, or beer schnapps as it’s sometimes called. It is similar to whiskey but instead of being distilled from the grain alone, this has been distilled from the brewed beer so that the hops can add flavour to the finished product. I bought 2 bottles straight away and I’m glad I did as it sold out pretty soon after.

This was golden in colour with a slightly thin but sticky body. The aroma was fascinating, with smoked bacon and earthy peat as the primary notes. The taste was smooth, with a rather sweet quality to it that you don’t experience with most whiskey. The body is not as heavy as I would have expected. It is very hard not to think about meat when drinking this, and just how nice they would work together. Of course, you felt the alcoholic burn in the chest, which left a lovely warming sensation as it was sipped. This was paired with a small amount of the Shlenkerla Urbock, and it was fascinating to try not just the spirit but also the beer that is distilled from.

Sweet and smokey, this was like drinking liquid ribs. This for me was a great end to the evening, with both the beer and spirit imparting their different qualities. I understand that smoked beer might not be to everyones taste, but to those of us who do like it, this was a great experience.