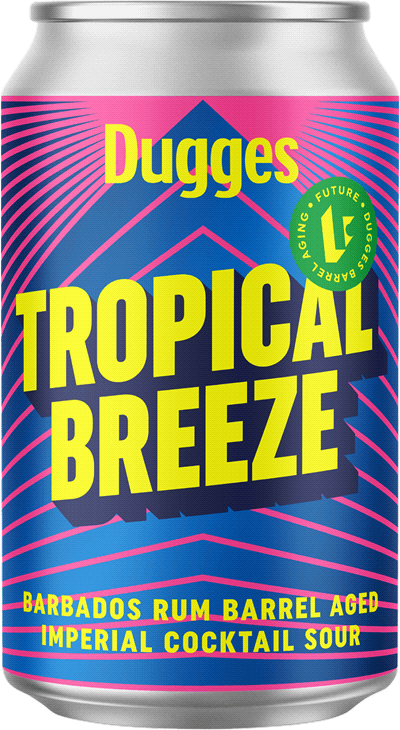 In 2005, Dugges opened just outside of Gothenburg and has grown to become one of the Sweden’s top craft brewers. Inspired by piña coladas the brewers drank in Miami in 2019, this massive imperial sour was released in March 2022. It was released at the same time as its sister beer, Coco Colada, which was similar but aged in Fiji rum barrels instead. Dugges best known sour beer is Tropic Thunder, which has grown to become the best-selling sour in Sweden today. With a reputation for producing quality sour beers, plus with this being aged in rum barrels from Barbados, I knew this would be a perfect finish to the tasting.

It was surprisingly dark, with a deep amber hue and semi haze noted. Literally zero head formed when decantered, but many bubbles were evident in the glass, so the carbonation was judged to be medium in strength. When swirled, there was clearly a thick body to the beer as it clung to the walls of the glass well. The aroma was a massive blend of pineapple and coconut, with the oak character backing those up. There were also hints of pomegranate hidden in the background. Upon sipping, those aromas continued into the taste, with a delightful blend of fruit sweetness and acidity balancing each other wonderfully. The aftertaste was drying and lasted a while, with the rum notes becoming more prevalent as time passed.

This is a big, big beer that needs to be savoured slowly to get the most out of it. It had some bold flavours that could be too much for some people, but I loved the blend of tropic fruit and sharpness. The biggest downside to this beer for me is the price, as I’m just not sure that it’s worth 75kr, however excellent it is. Another excellent sour from the Dugges team and definitely worth a try if you don’t mind the rather high price tag.