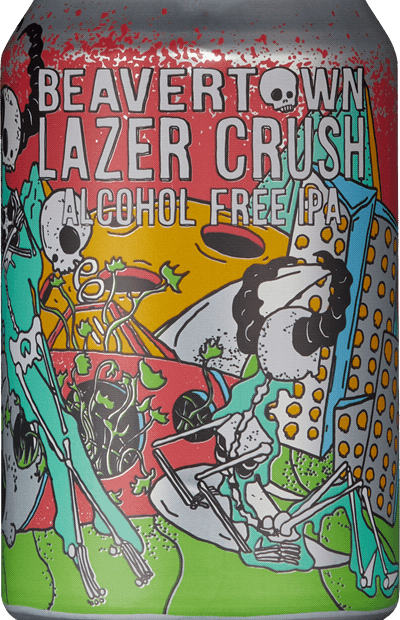 Beavertown Brewery was started in 2011 by Logan Plant in De Beauvoir, London, with the name Beavertown being an old cockney name for De Beauvoir. Logan Plant is the son of Roger Plant, lead singer of Led Zeppelin. Since 2014 the brewery has moved to Tottenham, North London. Brewed with pilsner malt and Azacca, Amarillo and Citra hops. The brewery is now owned be Heineken, after they invested  £40 million in 2018 for production of a new brewery and visitors centre. It’s not often I have alcohol-free beers in my tastings, but I thought it was important at Christmas to showcase a good alternative for people who might be driving over the holiday season.

This was extremely light in colour, so much so in fact that it was almost reminiscent of a pale yellow cider. There were hits of citrus, pine and a hint of malt in the light and fragrant aroma. Upon tasting, it was very sweet and had that distinctive alcohol-free beer tang from the unfermented wort and residual sugars. It was easy to drink though, with a very low bitterness and a nice lemon edge that worked well. With a medium to thin body, this left a sweetness on the palate that was nice but nothing remarkable.

I wouldn’t say this is the best alcohol-free beer I’ve ever had, but it’s far from the worst. Light and easy to drink, it suffers from the familiar over sweet taste that is found in a lot of alcohol-free beers. It’s quite hard to judge this at the same time as drinking 12% stouts and 10% Belgian dark beers, but it’s well made with no major defects and would be a good alternative to try if you’re driving over Christmas and still fancy having a beer.