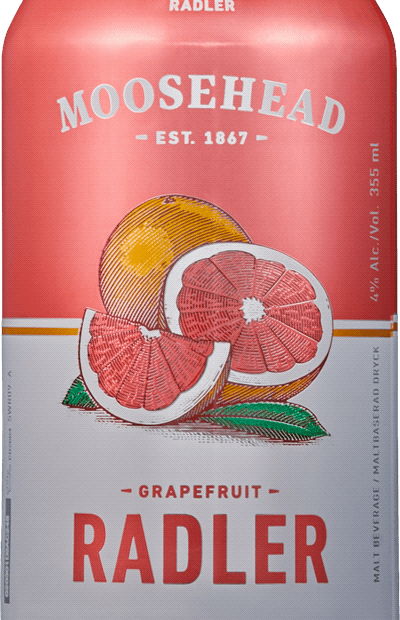 Founded in 1867 as the Turtle Grove Brewery in New Brunswick, Moosehead Breweries is the last major independent brewery in Canada and still owned by the founding Oland family. With revenues above $260 million, Moosehead currently share about 4% of the Canadian beer market. This radler is produced using 15% blended grapefruit, lemon and grape juice. A radler is traditionally a German style shandy, blending beer and lemonade. Radler is the Bavarian dialect word for Radfahrer (“cyclist”). It is a theory that it got its name due to the low alcohol content and so was perfect as a thirst quencher among keen cyclists. This was bought into the tasting as a replacement for a beer that tasted absolutely vile and so even thought it’s not that weird, it seemed like a good way to ease the tasting into gear.

This had a lovely golden shine to it when decanted, with a thick white head building well in the glass. The aroma was a big hit of grapefruit, which was rather unsurprising. Hay and lemon were also noted in the sweet but extremely pleasant smell. Upon sipping, the beer had a thin to medium body but with high carbonation that bubbled on the tongue. The grapefruit again came through strongly in the taste, with some malt character backing it up briefly. The aftertaste was short and fruity, but left the mouth feeling reinvigorated.

This was a very pleasant way to begin the tasting. Light, fresh and easy to drink, this was a very nice radler. I would say it was fairly one dimensional, with not much else than the grapefruit really pulling through that strongly. This would be a great session beer though, and I would be very happy to try this again.