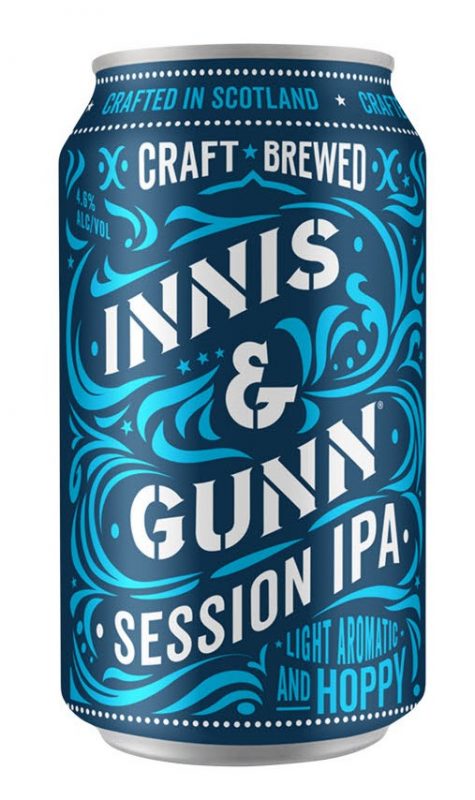 When I was planning the tasting I paired one IPA and one stout together as to get a large variation in styles. I nicknamed the pairs Sweet, Bitter, Citrus and Guinness. I had some extra money in my budget though so I decided to add a fifth pairing, nicknamed “cheap”. I wanted to see exactly what you got when you bought the cheapest IPA and stout in the shop. Was it really worth saving a few kronor if it meant getting a vastly inferior beer? The cheapest IPA I could find was this session IPA from Innis & Gunn, coming in at a measly 15kr. You definitely get what you pay for though with this lightweight.

This beer was highly carbonated with a light golden body. The soapy white head holding and looked pretty nice. The aroma was, to be polite, rather light. There were pleasant hints of lemon grass, lime peel and caramel sweetness, yet it was still a very mild aroma. The taste too was understated and seemed to be missing the IPA hop presence. There was just no bite to it at all. It was very malt orientated with some very low lemon and oak notes but that’s about it. If they had said this was supposed to be a British style IPA with more subdued bitterness, then the taste would make sense. Unfortunately they state on the can that this is supposed to be a West Coast IPA, yet it showed basically none of the qualities usually observed with that genre. I understand it’s a session IPA, but it still feels like it is missing character. The aftertaste was not really anything special, and disappeared quickly.

Why would they call it a West Coast IPA but removed the alcohol and the bitterness to produce this meek and mild shadow of a beer? It is all rather strange. This was one of the cheapest beers on the shelf and its clear to see why that is. It’s not badly made but it’s just not worth your time. Spend a few extra kronor and buy the ForePure Shapeshifter instead.