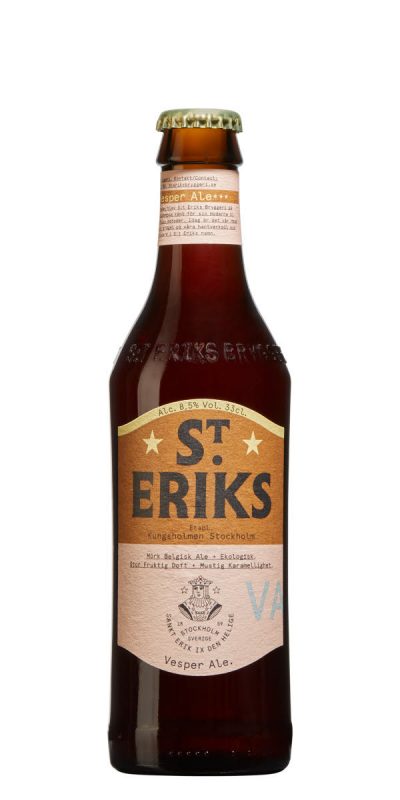 There are thousands upon thousands of different breweries in the world producing brews ranging from mind blowingly awesome to vomit enducing rat piss. There is nothing better though than finding a brewery you can trust. If you buy a beer from them, you know that it will be a well produced, likeable beer no matter what you pick from their range. St. Eriks is one of those breweries for me. I have always enjoyed their products and when I found the Vesper Ale I became rather excited. I knew that a Belgian style dark ale from these guys would be a winner and I wasn’t wrong. St. Eriks has a history of brewing dating back to 1859 but had a major relaunch back in 2010. They have gone from strength to strength since, becoming one of the most well-respected craft brewers in Sweden.

I find it a shame that St. Eriks have changed their bottle shape. I always thought the fat bottomed bottles they had before were pretty and recognisable to their branding. The new bottle shapes are rather generic and the label redesign is quite appalling really. At least the bad packaging didn’t affect the contents of the bottle. It poured clear ruby-red to very dark amber, with a mocha head that didn’t have much substance to it. It appeared that there was little bubble presence in the glass, but that didn’t hurt the overall presentation of the ber. There was big Belgian sweetness on the nose, along with a delicious blend of rye, prunes, raisins, pepper and a slight herbal hint. It had a thick mouthfeel that filled the mouth well upon tasting. It was a complex mixture of flavours including a lot of dark fruits, blackberry, plum, dried apricots and brown sugar. There was a surprisingly short aftertaste with a caramel sweetness but I also felt the heat from the 8.5% alcohol in the back of the throat.

This beer was right up my alley. Fruity, dark and sweet to the taste made it a beer that was easy to drink. I could drink a few of these in a session but maybe not that fast. This is another winner from St. Eriks. I still wish they had kept their iconic bottle shape though. If you’re look for a tasty beer to try with a big rack of ribs, you can’t go wrong with this.