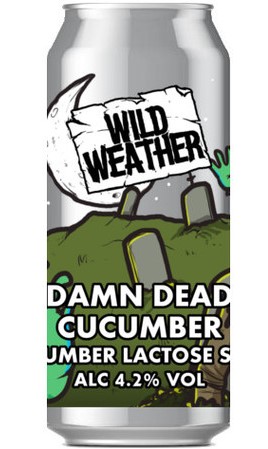 I’ve said it before and I’ll say it again: I love strange beer! Experiencing new flavour combinations and brewing processes really excites me. You can walk into Systembolaget and try 40 lagers that all practically taste the same, but finding unusual taste combinations is what interests me the most. One of the strangest beers I ever tried was a tzatziki beer, which tasted like cucumber, yoghurt and mint. I know it sounds weird but it worked so well and I wish I had bought more bottles when I had the chance. So when this cucumber sour appeared on the list of beers being released, I made sure I was ready to order some as soon as they were available. A cucumber and lactose sour sounded strange but fun and so of course I put it directly into the tasting.

This had a hazy gold hue with a small white head that formed when poured. It was also medium bodied and quite low in carbonation from its appearance. The initial aromas that were noted were cucumber, cream and a lemon acidity. A small amount of salt was ever detected by some, almost forming a slight gherkin hint in the smell. I didn’t expect this beer to taste of much, as cucumber is so renowned for being light in flavour. I must hand it to Wild Weather though, as a strong cucumber punch came through well in the first mouthful, along with a mild generic fruit acidity. It was quite thick in the mouth, with the lactose rather noticable. The cucumber really lingered on the palate after swallowing in an almost sweet, invigorating fashion.

Refreshing and strange at the same time, I was quite surprised by this beer. The fact that they have managed to pull the flavour of the cucumber out as well as they have is a big compliment. If you like your sour beers heavy on the acidity I don’t think this is for you. If however you are looking for something a bit different and you don’t mind your sour beer to be in the milder side then this could be one for you.