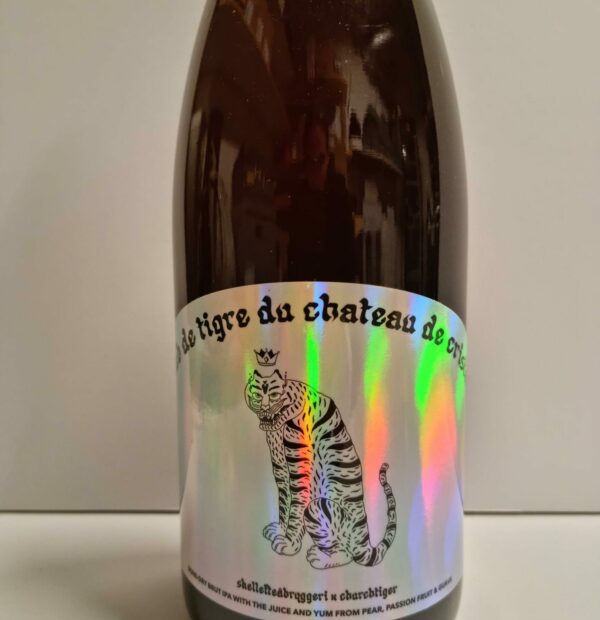 Skellefteå Brewery opened in 2011 and brew in the same location as the old Skellefteå Ångbryggeri. They currently release beer under a few different brands, including Kallholmen, Bryggarbackens and Backens. The style Brut IPA was invented by Kim Sturdavant, head brewer at San Francisco’s Social Kitchen and Brewery in 2019. To make a brut IPA, brewers add the enzyme amyloglucosidase to remove residual sugars, thus producing an extremely crisp and dry beer. A few years ago, it seemed like every brewery in Sweden was producing a brut IPA, but the fad seemed to die out rather quickly. I was glad to see that a few are still being made though, as I think it’s a fascinating sub category of IPA. I just knew that this would be a winner, and although I really enjoyed it, it didn’t feel to me like a true brut IPA.

Amber in colour with a thin head that held well, this beer had a medium body when swirled. The pear and passion fruit were noted in the aroma, along with citrus and a slight pine. The taste followed the aroma, with the fruit noticed first that then mellowed on the tongue slowly after swallowing. This was not overly bitter, but a balanced level that worked well with the sweetness. It wasn’t as dry as I expected, probably due to the fruit used in the production. The aftertaste was round and lingered nicely, waiting to be refreshed with the next step. Even though it was 7.8%, the alcohol was hidden well.

This was a great IPA, but for me this wasn’t dry enough to be a brut IPA. I could easily buy this again, but I wouldn’t say this is the best example of the genre. If you do manage to find one of the few remaining rare bottles that are still around though, I highly recommend you try this before it’s too late.