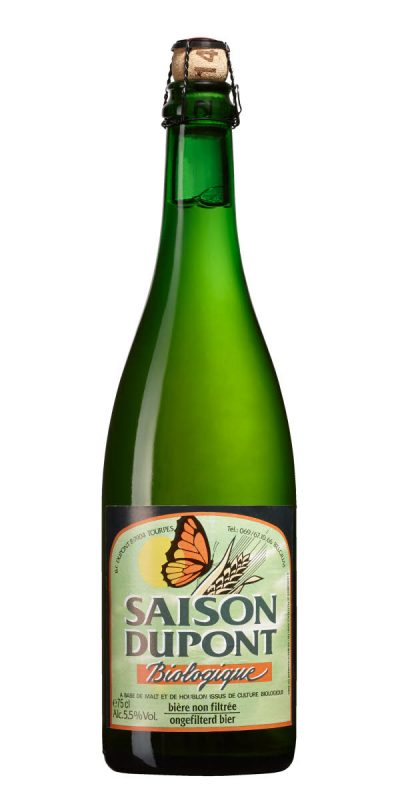 Saison is a pale ale style of beer originally from Belgium and is traditionally highly carbonated with a slight tart fruitiness. It was mainly brewed on farms in the springtime as there was usually less work to be done in the spring months so it gave the farm workers something to do. It was also a great time of year to brew as the cooler springtime weather was excellent for brewing as the risk of the beer being spoiled by the heat was reduced. It was brewed quite low in alcohol strength, but the modern-day versions have increased this to make it more appealing to consumers. Brasserie Dupont became one of the most well-known producer of saison beers in the world during the 1980s as Americans began to import more. I thought that reviewing one of their beers would be a great introduction into this tasty and unique style.

It was slightly hazy but golden in colour with a head that failed to really make any sort of impression. The body was medium to light but showed a rather decent amount of small bubbles permeating it. The aroma gave of a variety of fragrances such as slightly sour hay, moss, light bread and a fresh citrus lemon that was hiding in the background. The earthiness continued in the tasting, with blended tones of hay, herbs and moss all backed up with a citrus tartness. It was rather mellow and slightly oily on the palate with a slight bite that followed through in the aftertaste.

For me this is a rather nice and refreshing summer beer. I can understand why it was given out in the summer months to the seasonal workers on the farms as a glass of this on a hot day would have been great. I would like this try to pair this with something slightly earthy, such as some nice baked mushrooms. I could easily buy another bottle of this to enjoy sitting on the balcony in the sun and sharing with someone.