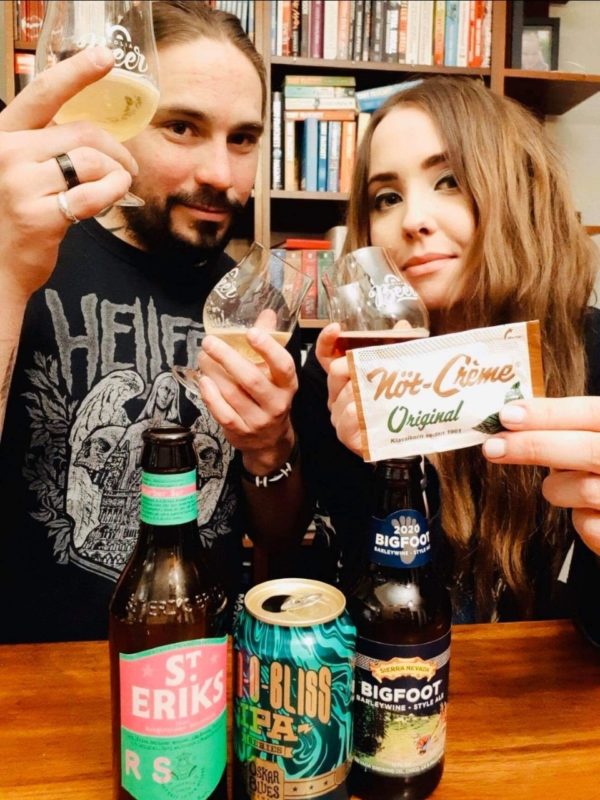 So, in 2020 Corona virus reared its nasty little head and basically cancelled the world. In Sweden, things started to close down in March as the virus took over, with many things being postponed indefinitely. As the general public were asked to stay away from pubs and restaurants, the amount of social interaction between people dropped substantially. I continued to hold the regular Umeå Beer Club tastings, with added social distancing and less physical interaction between the guests. I felt that it would be nice to do something for people who couldn’t go out due to being in a high infection risk group or people who just felt uncomfortable with the idea of going to a pub. I decided to hold some beer tastings live on Instagram so that people could participate in from the comfort of their own living room. All they needed to do was buy the beer at Systembolaget and log in when we went live. I was joined at nearly every tasting by Mimmi, which was great as I find it really helped to have a second opinion on the beer. It also helps to keep the conversation flowing and most importantly, it’s a lot of fun to try new beers together! We never got paid for holding the tastings and bought all the beer ourselves. We just wanted to help in a tiny way to connected people at a very strange time in the world. As the tastings have proved so popular we have decided to continue with them into 2021 until this virus is finally under control and things are back to normal!

I’m not going to go into a deep description of each beer as there has been so many of them. I will score them out of 5 so you can see roughly what I thought of the beer. If you see something that makes you curious feel free to go and track them down! Some of the live tastings were saved on Instagram so feel free to go and check them out if you wish. This list will be updated as we hold more events. Any future tastings will be listed under the “Upcoming tastings” section of this website. Hope to see you there soon!