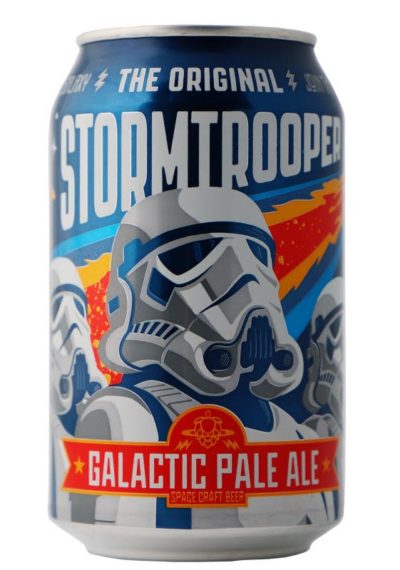 It must be said, I’m quite a bit Star Wars fan. I’m not the nerdiest lover of all things Skywalker but I do enjoy the films and series. When my friend showed me that there was a Stormtrooper themed beer coming to Sweden which was officially licensed from the guy who made the armour for the original trilogy of films, I knew I had to have it. I then realised it would be a perfect way to start the IPA tasting. By showcasing a pale ale, I thought it would be nice to show the guests the qualities you would expect from genre before we dived into some of the wide varieties of IPA. Unfortunately this seemed just a bit too… basic.

This poured amber in colour with a well forming head that held a surprisingly long time. The aroma was quite muted but some cereal, biscuit, caramel and a hint of quite non-descript fruit were present. The taste wasn’t exactly much more exciting. It was quite thin in body and felt rather flat in the mouth. There was hits of toast, citrus and digestive on the tongue along with a herbal flourish from the hops. The aftertaste was fairly short and didn’t leave the mouth wanting more.

This as underwhelming to say the least. I’ve had much better pale ales and I honestly think the price doesn’t represent the product especially well. Would I recommend this? Probably not, as you need to buy a whole pack of 12 from Systembolaget if you’re ordering them. Could I drink it again? Yeah, I mean it wasn’t bad. It was just… disappointing. In the end, the name of the beer is a great reflection of the beer: like the Stormtroopers, this fails to hit its target.