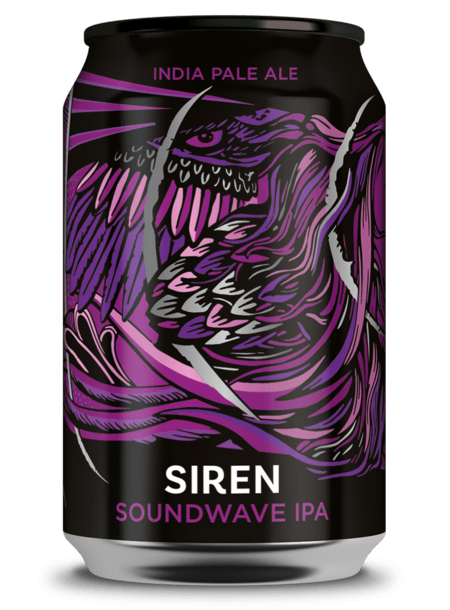 It would impossible to conduct an English tasting without an IPA being present. Inherently an English style, this type of beer is now synonymous the world over with craft beer and the genre continues to evolve and expand to this day. I thought I would go with a slightly more fruity IPA as I wanted to expand my range and set it apart from some of the other beers we were having that night. Siren Brewing came into existence in June 2012 and has steadily grown in size and strength. Soundwave is their flagship IPA, and that is usually a good starting point to begin judging just how good a brewery is performing. I must also say that I thought the can artwork was delightful too and it was a really eye-catching can.

This juicy little IPA was canary yellow hued with a light, cloudy tint. The light white head that formed with thin but held adequately. It was hard to tell bubble density due to the haze. Upon inhaling, it was evident that this IPA was very aromatic. Fresh mango and pineapple bounded from the glass, bringing this fruit sweetness to the nose. The first sip revealed a complex taste of tropical fruits and pine that blended nicely. A definite herbal hit like basil was present along with a floral edge that rushed through the mouth. The aftertaste was light but continued well with the earthy pine. The mouthfeel was impressive, with its slightly oily texture coating the mouth well.

I can’t lie, this is my kind of IPA. It’s rather subdued yet it has a bit of everything. From floral and herbal tones to a fresh tropical body, this just blended well together to make a very drinkable beer. This was my first Siren beer but I will be looking out for more from their range very soon indeed.