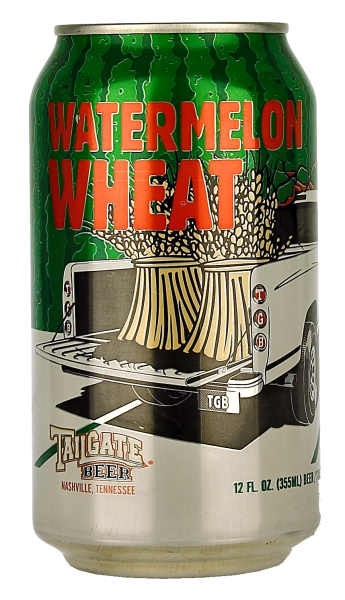 When researching beers for the summer beer tasting, I knew I wanted something to do with watermelon. There is nothing quite like the cool, refreshing taste of a juicy bit of watermelon on a day when the sun is streaming down on you. Surprisingly pickings were quite slim but I did stumble upon this can. I had never heard of Tailgate Brewery before, but I thought the idea of a wheat beer infused with watermelon sounded like a very interesting combination. After the beer tasting a friend tried to order some in for herself but they had sold out completely in Sweden. It looks like this was a one time tasting, but it was definitely an interesting beer.

To start, the can looked rather cool. It was nice and bright with the exclamation of it being “summertime in a can, for your face”. I’m not sure that a watermelon what beer though would be the “official beer of tailgating” though as it also proudly proclaimed. It was a hazy hay colour and sediment was suspended in the beer. There was little carbonation, which I was surprised by as I expected quite a bubbly little number. It can be quite hard to get things to smell like melon but they succeeded rather well here, albeit a little artificial. The aroma was a mix of fabric softener and Jolly Rancher candy that was pleasant but also rather sweet. It tasted like slightly carbonated watermelon jelly in a way along with the wheat notes following behind. It was a bit oily almost but that might be due to the syrup like stickiness. It dried the mouth which is strange in a beer that clearly aims to be a thirst quencher.

So what did I think of this? I thought it tasted quite fake to be honest. It wasn’t a nice, refreshing fruity beer but more like watermelon soda had been mixed with a rather flat beer. It was quite strange and rather sickly. I don’t think I could manage to drink more than one of these. If I wanted a break from beer for a round and I fancied some sort of alcopop then this would be a good solution, but apart from that I couldn’t see myself drinking this again. It was just a bit too weird and artificial for my liking. Pass.