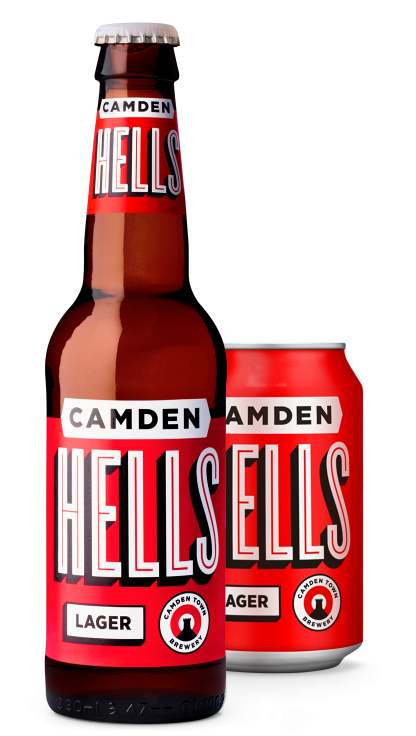 If you have spent some time looking at the British brewing industry over the last few years you will have seen the rise of Camden Town Brewery. Over the last decade they have gone from being a small scale craft brewer that produced beer in a pub cellar to being bought by Anheuser-Busch InBev in 2015 for £85 million. Anheuser-Busch InBev is the worlds largest brewer, owning over 400 beer brands world wide. This led to cries by some in the brewing industry that Camden Town Brewing was “selling out” and Brewdog went so far as to take away their products from their pub chain. Whatever your opinion of the takeover, Camden Brewing is here to stay.

I tried a few of their beers quite a while ago so I thought it was time to time to revisit one of their products as a bit of a memory update. The hells seemed like a good start as it is one of their flagship products. It is actually a mixture of the two different German lager styles Helles and Pilsner.  Pale golden in colour and with a white fluffy head, it seemed like a typical pilsner. A slight subtle aroma of grain, crackers and maybe a small metallic hint greeted me after the pouring. It felt a bit bland but nothing particularly wrong with it. Its taste wasn’t surprising as it matched the smell rather closely. The pale malt came through strongly along with a continuation of the metallic tone. It was crisp and dry on the palate with a mall bitterness finally coming through on the back of the tongue in the aftertaste.

I found this beer rather bland quite honestly. I am fine with beers having a subtle flavour but I thought it was just so generic. It was balanced but nothing more than a standard lager. As one of the darlings of the craft beer scene in Britain, I expected something a little more than an average, run of the mill lager.