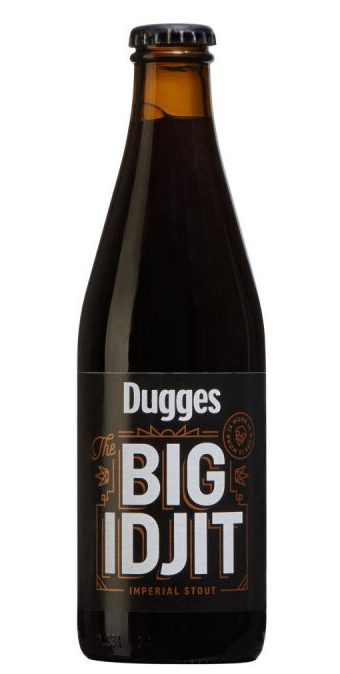 Dugges has a great track record of producing great quality beers of all shapes and sizes. The Idjit stout is a Dugges classic beer that they have brewed in many forms over the years. They have never produced a turbo charged version though until now. I was keen to get my hands on this as soon as I read that it was being released as Systembolaget in a small quantity. I’m happy to say I was not disappointed.
As one would expect with an imperial stout, the beer was thick. Very thick. It poured slowly into the glass, showing off its lovely deep richness. It was very dark red to black and formed a mocha head that went quickly, due to the low carbonation that was present. Just one whiff into the glass gave off a cascade of scents including strong licorice, dark chocolate, burnt coffee, iron, tar and a hint of mould somewhere in the back. It sounds like a strange combination but it worked. The beer had a very strong burnt coffee bitterness to it. Oak, vanilla and licorice were all noted too. The beer coated the mouth completely with a somewhat creamy texture and a dark chocolate after taste became more prominent towards the end of the beer. The alcoholic sting came through hard and the whole of the tongue and throat knew that the stout had a high ABV.
For me this is a great imperial stout to share with a friend to round off a nice meal or to accompany a nice rich chocolate dessert. It’s not cheap, but worth a bottle now and again if you can find it near you. This would make a good beer to store for a while and crack open on special occasions. I look forward to seeing what is next in store for the Idjit brand.