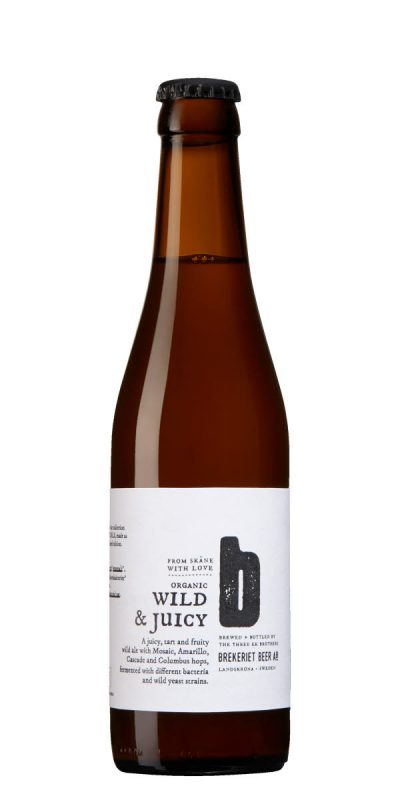 Brekeriet is a craft brewery from the deep south of Sweden and was set up by three brothers in 2012. They specialise in beers that are brewed using wild yeasts and bacteria which is rather unique in Sweden. This usully means the beers are rather acidic in nature. These beers are then sometimes fermented again with berries or fruits to give a tangy edge to their creations. I actually bought this beer for the porn film sounding name. Cmon, if you see a beer called “wild and juicy”, you have to try it surely? What I ended up getting was a decent sour beer that was quite challenging.

The bottle (like many of the Brekeriet labels I’ve seen) didn’t exactly thrill me. I understand the style they are going for but it just feels a bit boring and it doesn’t exactly grab the eye. The beer looked like some sort of mango milk smoothie, with it being very pale beige in colour and very cloudy. The cloudiness of the beer made it hard to see how much bubble was in there. The smell was very sour but a large number of aromas crept out such as vinegar, passionfruit, sour cream and yoghurt. The beer lived up to its name well though as it was definitely juicy. It made my mouth water with its acidity. It reminded me of one of those sour sweets that turns your eyelids inside out when you’re a child. It was acidic with sharp, citrus grapefruit peel, peaches and funky yeast  notes. It had a silky mouthfeel probably due to the lactic acid. The sharpness continued into the aftertaste and made the mouth water but in a rather pleasant way.

It wasn’t exactly an easy to drink, sipping beer. I liked it but it was not something I could drink a lot of in one session. I think this could be a nice beer to share, maybe paired with some nice tart passionfruit cheesecake to really match that acidity. I look forward to trying more from these guys later on.