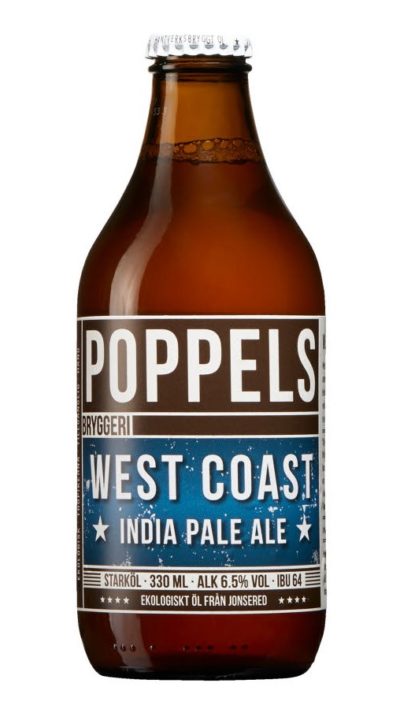 A hones confession right off the bat: West Coast IPA is probably my least favourite of the all the different IPA styles. Even though they are made to be pine and resin taste bombs, I just find most of them to be too dry and bitter for my liking. I knew though for the tasting that I should get one as I still think it is an important genre to include. After looking around I decided to go for the Poppels West Coast as they have a proven track record for quality beers so I thought it would be a rather safe choice.

This was medium straw in colour with a light haze. The pure white head formed easily but also disppeared quite rapidly. The aroma was surprisingly fruity, with a big pine presence in the forefront then backed up with unripe pineapple, papaya and pomegranate. Of course the expected big bitterness kicked in straight away as the beer hit the tongue. A literally cornucopia of flavours such as pine, resin, moss, papaya and cloudberry seeds were all noted as the beer was inbibed. This was medium in body which is quite true to the style as I wasn’t expecting some sort of juicebox mouthfeel. The aftertaste had a long out drawn out bitterness which really caught on the back of the palate and refused to leave. It dried the mouth and left a earthy bite that lingered until the next sip.

As I said, this is not a style of beer I am usually drawn towards. I think thought that this was well-made and not as unbalanced as I have found a lot of West Coast IPAs to be. I could drink this again but if I had to buy a Poppels I would still be more drawn towards their Passion Pale Ale over this.