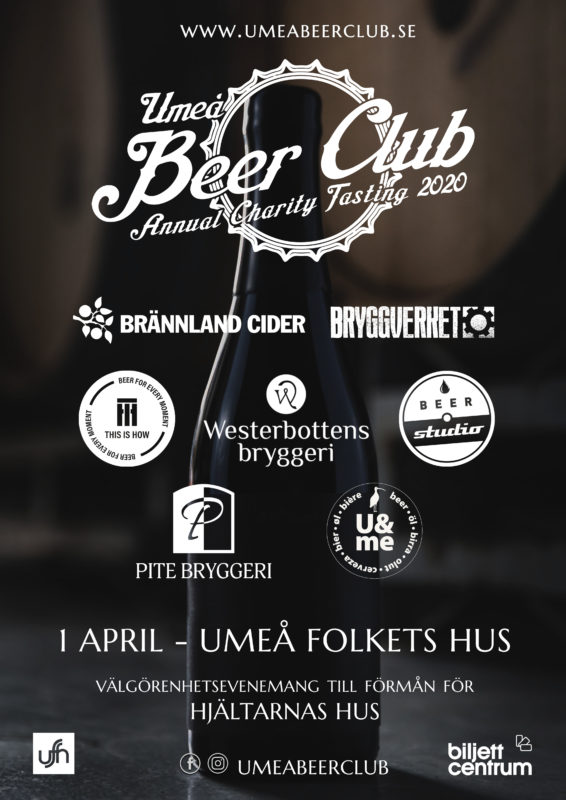 In 2018 I raised about 2500kr for Hjältarnas Hus, a charity that helps families with sick children, by donating a small amount of money from each ticket sold during the year. In January 2020 I decided I wanted to hold a charity beer tasting as I believed it would increase the amount raised and would be a fun night! I was due to hold the event in April 2020, but due to the corona virus it was delayed. Finally in August 2020 the night went ahead. 7 different businesses donated their drinks to the tasting: Bryggverket, Beer Studio, U&Me Beer, Westerbotten Bryggeri, Brännland Cider, This Is How Brewery and Pite Bryggeri.

We started the night with a pre drink of Pop Art Lingon Cream soda donated by Beer Studio. Sweet, fruity and well carbonated, it was a lovely way to wake the palate up before the tasting. When we began to try the beers, we started with Loop Session lager which was also from Beer Studio. This was apricot in colour with good carbonation. Fresh citrus hit the nose along with freshly cut grass and a hint of sweetness to produce a pleasant blend of aromas. The copious amounts of lime were really at the forefront of this beer, with both the juice and zest instantly noticable. The malts came through in the back end of each sip, with a impressive hop undertone flourishing in the aftertaste. Straw and floral hints were also noted. A very nice session lager, with an added citric edge to set it apart from a wave of average craft lagers.

After that we moved on to Westerbotten Bryggeri and their Vithatten wheat beer. Very hazy straw in colour and with a medium body, the head that formed was above average but didn’t hold that long. That classic sweet aroma of over ripe banana, bubblegum and cloves was evident straight away. The sweet wheat notes combined with citrus and grass, swirling in the mouth. The cloves came through strong in the aftertaste, yet it was quite short but left the mouth feeling fresh. It isn’t as sweet as most German wheat beers and definitely had an above average citrus note to it. Refreshing!

Our third beer of the night was Bränd IPA from U&ME Beer. This beer was slight cloudy and light bronze in colour with low carbonation. A pure white light head formed upon pouring. The aroma was funky grapefruit peel, cellar tones and moss, with not much emphasis on the malt tones. On the tongue, orange oil, earthy moss and again grapefruit dominated the palate. Pine needles in the aftertaste slowly spread around the mouth, leaving a dryness coupled with a warming sensation that sat deep in the throat. This is an IPA that would suit people who prefer their IPA on the bitter side.

After a lager, wheat beer and IPA, we decided to switch things up completely and next tried an imperial stout. This Is How To Skip Dessert from This Is How Brewery in Piteå was deep, deep brown to black with a cream head that held rather well. The aroma was intense, with big bitter cacoa, roasted coffee beans, and licorice invigorating the senses. It was reminiscent of a kladdkaka (sticky chocolate cake) that has been in the oven slightly too long. Heavy and viscous in body, this stout had some massive dark chocolate hits in the taste. It was very drying, like almost eating a small spoonful of cacao powder. The alcohol was very well hidden it must be said. If you didn’t know you would never guess this was 10.5%!  The aftertaste was long and drawn out, with the bitterness continuing long after swallowing. I think I would like a bit more sweetness, but this was paired on the night with locally made Vintage Plantation chocolate which was a dream combination!

After a short break we changed things again and had our first cider of the night. P Pernilla Perle from Brännland Cider had a lovely sharp golden colour. A refreshing round yellow apple aroma was present along with some red apple notes to back it up. This was warming and sweet in the nostril. Upon sipping, it seemed quite low in carbonation. A big granny smith peel dryness enveloped the tongue and was similar to red wine as the high tannins  were noticed. The sharpness came through in the aftertaste coupled with a thick, oily body. This was a delicious cider to have at the end of a meal, but maybe not one to drink over a session.

From cider we then moved to another beer that originated in Piteå. Belgo Twin dubbel from Pite Bryggeri was mahogany coloured with a hint of cloud. Upon pouring, a rather thick body was noted along with a slight cream hued head that didn’t hold particularly well. The hallmarks of a traditional dubbel were evident, with big Belgian candy sugar, raisins, yeast, rum and small aniseed notes all there in the aroma . The oily texture really covers every inch of the mouth, with notes of caramel, honey, metal and brown sugar all rolling around the palate. A big boozy hit also was detected deep towards the back of the throat. The aftertaste was surprisingly warm, with the dates following through well after swallowing. This beer had a great balance between sweet, dry and fruity.

Moving back into our second cider of the night, we then moved onto the Claim Iscider from Brännland Cider. This has a bright golden amber hue that shined in the light. There were very rustic red apple aromas, with hints of yeast, farmyard and fallen autumn leaves. The enchanting aroma was reminiscent of the last days of summer. One sip caused an explosion of red apple sweetness on the palate. This was extremely smooth with hints of wood as well. The aftertaste was short but left a lovely tannin like dryness. The alcohol was completely hidden except for a tiny warmth that greeted the tongue. This would be a perfect replacement to dessert wine and if you get a chance you should give it a go.

Last but not least we had two versions of Stout Ist Krieg imperial stout from Bryggverket. They were made especially for the night and were quite crazy! The first was a peanut beer and strawberry version and the second was a completely over the top mint chocolate, hazelnut and maple syrup version. Both of the beers were deep brown to black as expected for the genre. The head was rather hard to tease out but it was deep beige when it finally formed. In the peanut butter and strawberry stout, both characteristics came through in the aroma. In the taste the peanuts blended nicely with the roasted chocolate, brown sugar and dark bread. The mint chocolate, maple and hazelnut beer was just insane, with big menthol hits exploding the senses. The taste was almost too much, but in a fun way. You were able to pinpoint the mint, maple and hazelnut during different segments of the taste.  The body in both samples was very creamy, and rolled over the tongue well. On the night, the peanut butter version was perferred by the guests, but both were great to try in such a limited quantity.

So 6 beers, 2 ciders and 1 soda made up the first charity tasting. Even with a reduced number of guests due to corona conditions, we managed to raise 9690kr for charity. None of this would have been possible without the generosity of the local business that donated their products. Martin, Mimmi and André all donated their time for free as well to make sure the night went smoothly behind the scenes. Thank you to everyone who bought a ticket and attended the night. I had a great time and look forward to 2021!