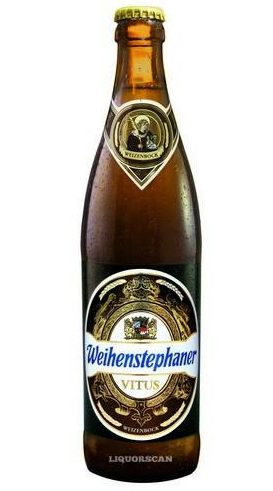 There’s something truly lovely about sitting down to a well made wheat beer. All beers can be satisfying, but the combination of distinct wheat characteristics really can make the wheat beer genre quite fulfilling. Weihenstephaner (or Bayerische Staatsbrauerei Weihenstephan to give it its full name) is considered one of the oldest breweries in the world, being founded in 1146. Since then it was risen to become one of the leading beacons of the wheat beer market with many exceptional beers produced.

The Vitus is one great example of this. It even won the award for “Worlds best beer” in 2011 at the World Beer Awards. It pours with a hazy straw complexion and with a nice thick, holding frothy white head. The classic wheat beer notes come flooding through, with ripe banana and cloves in the forefront accompanied by hints of apricot and vanilla. A nice round body coats the mouth with a sparkling effervescence. Dried fruit, banana peel and cloves hit the palate directly, to be replaced by a slight spicy warmth from the alcohol.

This is not just an amazing wheat beer, but it is understandably a world class beer. If you’re looking for the first entry into the world of wheat, you could do no better than to start right here.