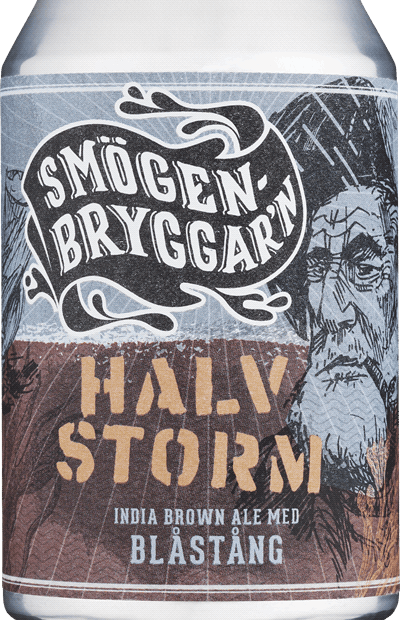 When I was searching through the Systembolaget website, I happened to stumble upon this strange beer. An India brown ale, made with seaweed?! Of course, I bought some cans straight away for this weird beer tasting. Smögen Ale is a brewery in Smögen that was founded in 2019. Working for a vibrant coastal community and a sustainable marine environment, products from the sea such as seaweed, mussel shells and sea salt are used in their beers. This beer is produced using barley malt and black tang seaweed along with Mosaic, Citra, Nelson Sauvin and Pacific Gem hops. To the best of my knowledge though, India brown ale isn’t an official beer style, but a blend of the IPA and brown ale characteristics that was quite hard to judge.

This was clear ruby red in colour with a giant fluffy eggshell cream head. The aroma was strange but pleasant with grass, salt, milk chocolate, moss and prunes all detected. The aromas translated into the taste, with the sea salt battling with dried fruit and hints of pine for dominance. Medium body but with a rather high carbonation that seemed a bit too much for the type of beer it was trying to be. Upon swallowing, it was very drying with a cocoa aftertaste that clung to the palate.

This was a strange but complex beer that changed in the mouth as it was drunk. The seaweed came through well, which was a pleasant surprise, as it would be easy for something like that to slip into the background a bit. I am a bit concerned about this beer though, as two of the cans exploded before the tasting, with the tops of the can literally being blown wide open. I presume it was still fermenting in the can, with the resulting pressure causing the cans to burst. This is the first time I’ve ever seen this is all my years of holding beer tastings, so it was quite shocking. For now, I reserve my judgement about this beer until I try it again, as this batch clearly had a major fault in it for it to cause the cans to explode.