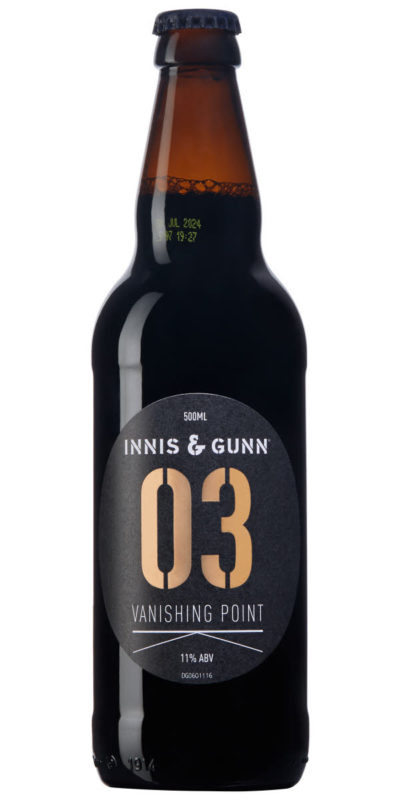 Innis and Gunn are one of the biggest played in Scottish craft brewing today. Established in 2003 by Dougal Gunn Sharp, this brewery has sky rocketed since inception. They now export their beer to over 35 different countries, leading certain markets with a range of different beers. No Scottish tasting would have been complete without at least one of their products, but the trick was the find one that  everyone hadn’t tried before. This was released just a few weeks before the tasting in limited quantity, so as soon as it was on the shelves I snapped a number of bottles for the night.

As you would expect from most imperial stouts, this had a pitch black hue. A  fluffy bubble bath head, the colour of hazelnut, held exceptionally well. Carbonation was unknown but it seemed to be fairly low. Upon the first sniff, the range of aromas included licorice, tar, oak and vanilla all wrapped up in a bourbon sweetness. Upon the first sip, the hit was really sweet and then the wood character really beings to express itself in the mouth.  Tonka beans and vanilla also crept onto the palate, forming a delicious mix. The body was thick and creamy. The beer was beautiful in the way it coated the whole mouth with its heavy smoke and sweet oily body. The aftertaste was like sweet tiramisu as the coffee notes becomes more pronounced after swallowing. The alcohol was of course noticeable, but it didn’t seem over the top and the 11% really suited the other qualities of this imperial stout.

I thought this was amazing, though I understand that some might think it was too sweet. .This got better after every sip, as the flavours built up over time. I could easily drink this again, but 50cl is rather a lot for one person. I would suggest sharing this as a lovely rich alternative to dessert. This was an epic, delicious stout and maybe one of the best beers Innis and Gunn has ever produced. it is a real shame it is limited edition though, but I hope this will be continued at some stage. Excellent!