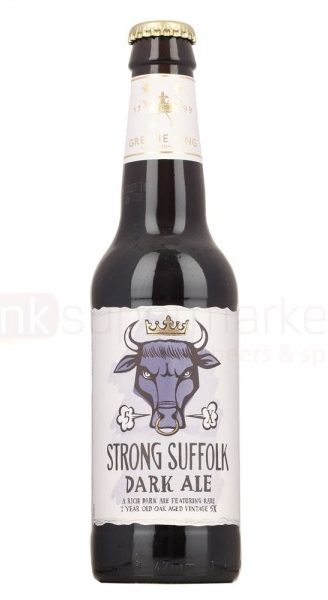 If you have spent any time drinking in Britain you will have probably spent time in a Greene King pub, whether you realised it or not. Greene King is the largest owner of public houses in Britain, with over 3,100 pubs under its control. The company is a major player in the British beer world and owns many well-known brands such as Old Speckled Hen, Abbots and Belhaven. The company brews and then sells these beers in its pubs and also exports overseas. It also makes some smaller batch ales and it was one of these that peaked my interest.

Old Suffolk dark ale is an interesting beer as it is actually a blend of two different beers. Old 5X is brewed up to a rather heavy 12% before it is aged in oak vats for two years. After the maturing period it is mixed with a freshly brewed dark beer called BPA to produce the final product. I was intrigued as to how these beers would blend together and what the final product would be, but I must say they have done a rather fine job.

It poured with a clear dark brown hue with slight red reflexes and a creamy cappuccino coloured head that held for a while. The beer smelled rather yummy it must be said. It was a rather complex aroma with a nice caramel sweetness coupled with dark fruits and a light leather. The fruits came through strong in the tasting. Raisins and plums came to the forefront along with a woody oak and licorice that were all enveloped in the thick, creamy body. It was surprisingly warming for just 6% but it worked alongside the sweet oak finishing aftertaste.

I must say I thought was beer was pretty amazing. It has the body to hold a cornucopia of delicious taste and smells and really is a delicious autumn warming beer. I enjoyed the oak sweetness and the fruits that really added a lot of punch. I could absolutely visit this beer again and I hope to do so soon!