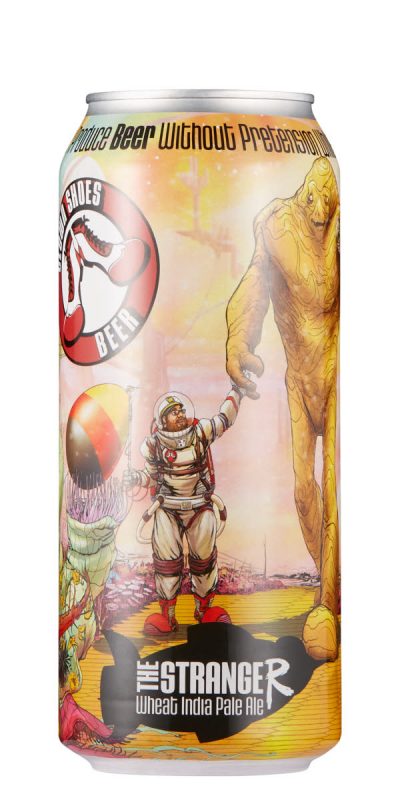 A couple of years ago I was talking to a friend in a pub over a beer or eight and the topic passed to American brews that had been enjoying recently. He told me about a beer by a company called Clown Shoes and it stuck in my brain just because it sounded such a crazy name for a brewery. I didn’t get to the try the specific beer he mentioned, but I remembered the name and I have been keeping my eye open for one of their beers ever since. When browsing the limited edition shelf at the local systembolaget I finally spotted what I had been searching for.

This beer jumped off the shelf out me with one of the most beautiful cans I have ever seen. It just looked so pretty and intriguing I knew I had to buy it straight away. I thought the can size was slightly strange though as I can’t recall seeing many 47cl cans. It was medium bodied, poured with a juicy looking peach haze and a fluffy foamy head. it looked almost like a sun rising on a slightly cloudy morning. There was a strong, dry aroma of grapefruit, straw and lemon on the nose which was all rather pleasant. Strong grapefruit peel hits came through in the tasting, along with a good hoppy bite that turned from fresh to quite drying in the after taste. It wasn’t that refreshing but it did have a nice bit of bubbly fizz on the tongue. A slight warmth was also noted deep in the throat from the alcohol.

I did like it, but I wished it had a bit more of the wheat sweetness in there. If you are going to market a wheat IPA, I personally hope to have both parts equal. I found the wheat part of the beer took a backseat and wished for something a little more. I think there are better wheat IPAs out there for the money. This wasn’t bad, it’s just hard to recommend it fully when you know there are better priced alternatives on the market today. I had a lot of expectations and maybe that didn’t help either. Maybe the new Clown Shoes I try will raise my hopes again.